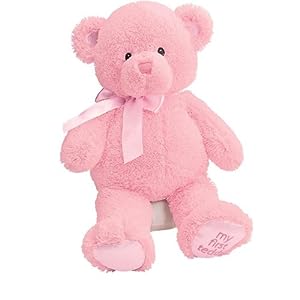 Gund Baby My First Teddy-Medium-Pink from Gund
only $11.99
View Buy at Amazon 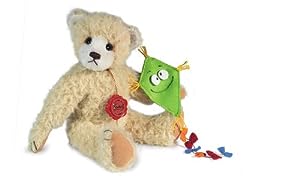 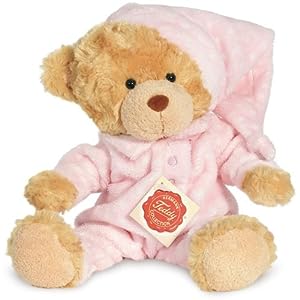 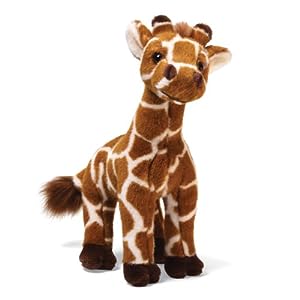 A little history of Teddy..

"The name Teddy Bear comes from former United States President Theodore Roosevelt, who was commonly known as "Teddy" (though he loathed being referred to as such).[3] The name originated from an incident on a bear hunting trip in Mississippi in November 1902, to which Roosevelt was invited by Mississippi Governor Andrew H. Longino. There were several other hunters competing, and most of them had already killed an animal. A suite of Roosevelt's attendants, led by Holt Collier,[4] cornered, clubbed, and tied an American Black Bear to a willow tree after a long exhausting chase with hounds. They called Roosevelt to the site and suggested that he should shoot it. He refused to shoot the bear himself, deeming this unsportsmanlike, but instructed that the bear be killed to put it out of its misery,[5][6] and it became the topic of a political cartoon by Clifford Berryman in The Washington Post on November 16, 1902.[7] While the initial cartoon of an adult black bear lassoed by a handler and a disgusted Roosevelt had symbolic overtones, later issues of that and other Berryman cartoons made the bear smaller and cuter.[8]

Morris Michtom saw the drawing of Roosevelt and was inspired to create a new toy. He created a little stuffed bear cub and put it in his shop window with a sign that read "Teddy's bear," after sending a bear to Roosevelt and receiving permission to use his name. The toys were an immediate success and Michtom founded the Ideal Novelty and Toy Co.[6]" Source http://en.wikipedia.org/wiki/Teddy_bear

Teddy Bear and his friends have joined us to offer comfort in the quiet times and busy times.  For the day that you need someone to listen and all you have is Teddy or one of his friends they are happy to listen and be there for you as long as you need.  Even one of his friends have traveled with me to MRI's.  It has no metal in it and they allowed me to hold it while I was in the machine.  Something simple gave me such comfort.  One visit that I knew was my last for a long while I left my friend there to help out others.  I was back in that office months later and he was still there and I found that he had helped so many others when they had to go into that machine!

So, we are happy to have them join in our walks, talks, and visits! 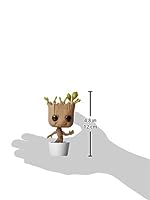 FunKo POP! Guardians of the Galaxy from FunKo

only $0.00
View Buy at Amazon
View All Special Offers

FunKo POP! Guardians of the Galaxy from FunKo

only $0.00
View Buy at Amazon
View All Best Sellers Cookies help us deliver our services. By using our services, you agree to our use of cookies. Learn More Accept